The SWS / S&M extension is a collection of features that seamlessly integrate into REAPER, the Digital Audio Workstation (DAW) software by Cockos, Inc.
It is a collaborative and open source project.

This feature (also called "macro markers") allows you to place any Reaper action as a marker, and have that action ran when the play cursor crosses over that marker.

All you have to do is place a marker and edit the marker text such that it starts with !, followed by the ID of a command/action/macro.  If you want to run more than one action, separate them with a space (eg !1 2 3).  If you want to run a custom action or an extension action, use the action name instead of # from the Reaper actions dialog, eg !_SWS_SNAPSHOT_GET1.

For example, this marker will cause the playback to jump to marker 2 when it crosses this marker: 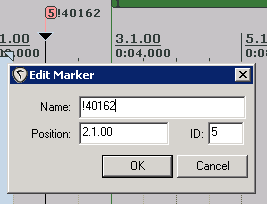 You can get a list of all of Reaper's Command IDs by scrolling to the right in the Actions ('?') dialog.

This functionality can be enabled or disabled using the actions below, or by going to the Options menu and checking/unchecking "Enable SWS marker actions".

In the forum there are lots of good ideas about uses for marker actions:  Here's the original thread, and this particularly good thread shows using marker actions for punch points.

Home - About - Download - Features
Copyright © 2014 and later SWS/S&M extension.
Made by hand with notepad.